Over the past few months I have been toying with the idea of upgrading my home security system. It isn't that I live in a high crime area or anything like that. We tend to get the occasional prankster youth who thinks it's funny to leave unwanted items on the front porch. Around the holidays things get a bit worse, with Amazon boxes being stolen in broad daylight. Most home security systems would do anything to prevent those types of things.

Then two unrelated things happened. Ring came out with the Ring Video Doorbell Pro, which they advertised as more reliable and more feature-packed. Shortly thereafter my doorbell died; not the entire mechanism - just the button. So off I went to Amazon and ordered one. The reviews were overwhelmingly positive, though some of the early adopters had issues with firmware. Most people said that when they did run into problems, Ring's customer service seemed ready and eager to solve the problem. I decided to give it a shot.

It took longer than I expected to receive. I ordered it on a Thursday and it didn't ship until the following Tuesday. It was delivered the next day, with the carrier leaving the well-branded Amazon Prime box sitting on my front porch. Had it been stolen, at least I would have appreciated the irony. As it happened, I was home when it was delivered, so I brought in the box and installed it the next day, exactly one week after my order. It says something that a week feels too long, but I'll leave that for another day.

Ready to install it, I opened the box and removed all of the contents. The Pro is smaller than the prior model, and offers live video monitoring on your smart device. The latter feature was the most important to me. It comes with five different color face plates, plus everything you need to install it (except for a drill).

The first installation step is to install the Ring app from the appropriate store. Ring supports iOS, Android, and Windows 10. I went to the App Store and installed the app onto my iPhone 7. So far so good.

The installation instructions are part of the app. There is a brief video that walks you through the entire process. The next thing to do is to cut power and install a voltage step-up converter to the existing doorbell. They make this dead simple by providing two very intuitive wire couplers. You unscrew two terminal screws, remove the wires, inserting them into the wire couplers. Then you insert the two well-labeled wires from the couplers into the doorbell. Using the provided double-sided spongy tape, you then stick the converter to the side of the doorbell and replace its cover. 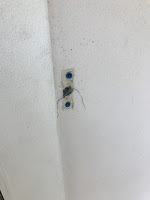 Moving outside, the next step is to remove the existing doorbell. This involved a total of four wires: two connecting the doorbell to the house, and two wires. My house is made of a stucco-like surface, which meant marking two spots on the house and drilling two holes with the included drill bit. Into the holes went two plastic wall anchors (also included).

Once the holes were drilled, I connected the doorbell wires to the Ring doorbell. These two wires simply complete it a circuit, so it doesn't even matter which wire goes to which screen. After that, two more included screws secure the doorbell to the house.

The installation video on my phone made every step clear. By this time, approximately 30 minutes had elapsed. I was going slowly, because I didn't want to make any stupid mistakes. It was time to turn the power back on. As soon as I did that, I clicked Continue on the app, which then informed me to complete the setup by connecting my phone to the WiFi hotspot built into the doorbell itself. When the phone connected, the app then became a configuration UI for the doorbell, which talked me through the rest of the setup. Yes, it talked - literally.

The only thing left to do was to connect the doorbell to my home's WiFi and optionally set up an account and motion detection zones. I went ahead and paid for the Ring Cloud video storage for $30/year. This way, any time motion is detected or someone rings the doorbell, the video of them is stored in the cloud with a date and time stamp. 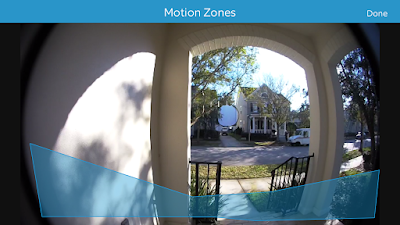 Setting up the motion detection zone will take some trial and error. I set it so that only someone coming up to my front porch will set it off, but it seems more sensitive than that. I got a lot of alerts today, but it was only people walking by the house.
I need to reduce its sensitivity a bit more.

So far, the number of false positives has been very small. I've also discovered that not many people come to my house during the day, which is fine by me.

One great positive is that I was at lunch one day and got a doorbell alert. I quickly answered and found that the pest control rep standing at the door. He said he was spraying the lawn that day according to our service contract. I thanked him and told him to proceed.

I got another motion alert when I was about 2500 miles away. I was able to watch in real time, content in knowing it was a neighbor walking the dog (yes, technically a false-positive).

The image quality is very good, and I have been able to recognize everyone captured on video. All of my recorded videos are automatically archived, and I can review them from my phone at any time.

I stand by my initial conclusion that I am very happy with the purchase.

Popular posts from this blog

September 03, 2014
It's happened to all of us. You are about to get a branch new smartphone, when it hits you. You're on level 250 of Frozen Free Fall. If you get a new phone, you'll lose all of that progress! Ok, admittedly this isn't the most pressing problem of our time, but it's annoying. So today I decided to do something about it.

I have a Samsung Galaxy S4 (Android), and just received an iPhone 5c. Before you bash me on my phone choice, let me explain that the iPhone is provided by my employer at no cost to me. Now you may proceed to bash me for putting games on my work phone.
First step: Frozen Free Fall had already been installed on both devices. Next, using the Astro File Manager on my Galaxy, I searched and found the Frozen game save stored in /storage/sdcard0/Android/data/com.disney.frozensaga_goo/files/user.dat. I imagine it will be in the same location on any Android phone. If not, just look for user.dat in a folder with a similar name. So, using a USB cable and the A…
12 comments
Read more

Pixabay.com Review: Get Free Images for Your Web Site or Application

April 08, 2015
I have a new favorite site this week. The other day I was looking for a picture of a swimming pool for a mobile app I'm writing (more on that later). Much to my excitement, I stumbled upon an online image catalog called Pixabay. This site claims to have over 360,000 images that can be used free of charge. Their terms of service indicate that every image is bound to the CC0 Public Domain license, which puts them into the public domain, and thus can be used for any legal purpose.

The site is attractive and easy to use. I typed "swimming pool" into the search box and was quickly rewarded with more than 450 images to review.

Pixabay offers three different types of images: photos, vector graphics, and illustrations. You can choose a single image type or all. I changed my search to include only photos, which reduced my search results to 414. Obviously most of their images of swimming pools are photographs.

There are more search options available. You can search by portrait or…
1 comment
Read more

March 08, 2017
I've been wrestling with Windows on my 2014 Mac Mini for more than two years. Soon after I bought the Mac, I made a 200GB BootCamp partition and installed Windows 7. I also bought Parallels 10 Desktop and pointed it at the BootCamp partition. It was great. I had a convenient VM when I needed something quick. I also had BootCamp when I needed native performance. Not long after that, I upgraded it to 8.1. Then sometime later, Windows 10.

I don't remember exactly when it happened, but one day I fired up Parallels and my entire system ground to a halt. Shutting down the virtual machine caused everything to go back to normal, so I figured the problem was with Parallels. So I upgraded it. Same problem. I made sure Windows was up-to-date, thinking that maybe the Windows Update service was going nuts. Nothing changed. Whenever Windows was running in Parallels, the Task Manager showed the disk activity pegged at 100%.

I tried all sorts of online solutions, but none worked. On a whim, I…
1 comment
Read more